Miss Dotty is the secretary of the ancient establishment of Blotting’s Academy and she’s lost her spectacles… again.

Join her as she tells of how she first found her unique eyepiece – a story of bandits, pirates and shipwrecks. Take the journey across the sea to discover that real treasure isn’t perhaps as far away as you might think.

This one-woman, hour-long play, is designed to be performed in the classroom or in a café style setting, transforming an everyday venue into a magical land.  Miss Dotty’s Specs draws on a selection of popular parables, bringing them to life in a light-hearted and fresh way.

The option of a performance with BSL is available on request.

“Loved it!  Felt very moved myself.  Loved the adventure, the journey.  Loved the danger, the discovery.  LOVED the moment Miss Dotty put on her spectacles.  Magical.”

For more information, or to book a performance, visit Suitcase and Spectacles webiste.

Rise of the Shadow Stealers

The Saint Appointments – An audio-guided pilgrimage to St. Robert’s Cave, a gentle journey to the home of the celebrity hermit, listening to one of four short stories about events within his life 800 years ago.

Wind in the Willows

Thanks to Rachel Burrows for the footage. For more of her work, and to see a longer video of Wind in the Willows, visit https://vimeo.com/kqrach

Drink with a Chimp – for Common Chorus Theatre

We have all got a part of ourselves that can run wild and cause chaos sometimes. Have you ever found yourself asking ‘why did I just do that?’ Sally is just the same, but she is also a drug addict… and if she can’t learn to control the wild creature inside of herself she is going to die.

“There is a sense that this company has got ‘under the skin’ to develop a play that has found both the misery of addiction and the communal hope – even joy – of those that are rediscovering dignity and self-worth. Those that literally have been given back their lives. … You don’t have to be an addict to recognise its relevance to all of our experiences.” – The Public Reviews 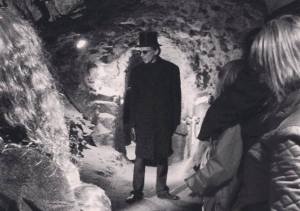 A storytelling performance at Knaresborough Castle. As the audience travelled around the grounds, they hunted for ‘The Man In The Black Coat’. Brave souls taking part in the experiment had to choose how to deal with the vampire in their midst – would they kill him or look into his eyes?

“People of all ages really engaged with the stories. I loved seeing the castle used so creatively.”

This performance was devised by a group of community performers. The show was site-specific to Knaresborough’s Frazer Theatre and told the fictional history of how C.S. Lewis was inspired to write one of his famous sermons on a visit to the town.

A collaboration with set designers, Hannah Sibai and Pav Ghir, the Tunnel was based on Shakespeare’s Seven Ages of Man speech. The audience walked one by one through seven rooms, each of which reflected one of the stages of life.

“It was extraordinary. Being blind at the beginning was very illuminating. I felt vulnerable and scared. The questions people wrote on the blackboard were very interesting, with a common theme of a search for meaning. Altogether very thought provoking; I felt soothed (as a baby at the beginning), challenged and afraid.Thanks everyone.” 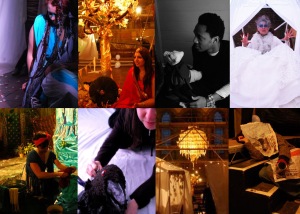 A site-specific performance at Left Bank, Leeds involving over seventy community performers and production crew. The audience could chose between four paths – North, South, East or West – which they travelled in small groups. Performers hidden along the path told tales of rebirth from different parts of the world.

“Delightful fun, felt like I was 8 years old and experiencing my first magical adventure!”

“Wow! The atmosphere was incredible – I could believe I have travelled across continents tonight.”

“This is perhaps the most wonderful piece of theatre I’ve experienced. I was on the edge of tears numerous times.”

A production commissioned by Leeds Minster, the Leeds Church Institute and Arts@Trinity. Staged around a ‘construction site’, the play combined great works of literature, Bible stories, historical accounts and autobiography to depict the growing power of Herod the Great. It drew parallels with other tyrants, such as Idi Amin, Adolf Hitler, Mark Antony and the Godfather, and was written and performed by a group of community artists, from both humanist and Christian perspectives.

“Whether it is learning about Adolf Hitler in History lessons or a Sermon describing King Herod’s ‘Slaughter of the Innocents’, stories that portray those who make terrible choices like James Bond Villains teach us nothing about the nature of evil.The truth is that evil is something that human beings do and if we want to understand and learn from their mistakes we need to see these people as human, even if we would prefer not to.”

Backed by the Arts Council of England and Seven Arts, HEAVE 2009 was a Pointed Arrow project, in which the team pushed their Land Boat through the cities, villages and countryside of Yorkshire on a 105 mile, 22 day, journey to explore the values of the region. The Yorkshire On-land Boating Club recruited more than 100 volunteer boat pushers and collected over 2000 values, written on their land boat.

“This is a bold and desperate venture to raise open discussion of social, religious, ethical, family and personal values…The presence of a boat is a beacon, drawing landlubbers to engage with the debate on the graffiti-wall, the discussion forum that is the Yorkshire Straif.” 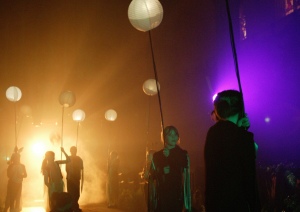 Commissioned by the Leeds Church Institute and Leeds Minster, Pointed Arrow threw their creative know-how into the mixing pot to create this epic and anarchic community-driven take on a ‘Medieval Pageant Play’.

“That there is everything community theatre should be.”

In 2007, Pointed Arrow embarked on a journey to dig up some bones. For two weeks along the South Coast of England, from Lands End to Hastings, we became wandering players in a big red postal van. As we travelled we created the myth of a pirate, Leonard Le-Bec, performed stories of his adventures, and left clues to his whereabouts.

The project was made up of four short stories performed spontaneously as we travelled and an hour long documentary show performed at the Edinburgh Fringe Festival.

“Like Scooby Doo meets Summer Holiday…This theatrical travelogue explores the process of storytelling and the mythologies that create our personal and national identities.”